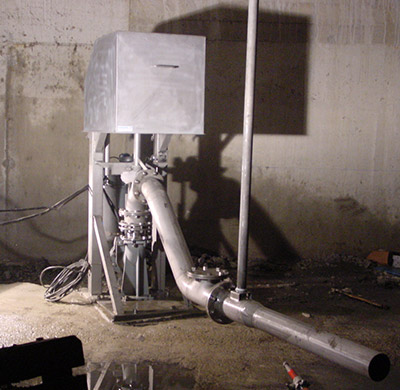 It consist in a submergible waste water that keeps in suspension the sediments in the retention tank.

The pump goes troght a pipe that has a nozzle. Air is introduced to the water.

The air is introduced and added to the jet of water, and this mixture of air and water is promoted to a high speed horizontally on the bottom of the tank. This way one tries to support quite the water retained in the tank in rotation so that the sediments stay in suspension.

Those that they have settled are mixed again and positions in suspension as the water level of the tank decreased.

It is recommended to use in combination by some of the previous equipments (tipping Buckets, Flushing gates, Vacuum Flushing) to eliminate the sedimentations that take place when it is not possible to put in suspension the gravels that exist in the sewer. In opposite case, this sedimentation will end up by covering the surface of the tank.